We missed the exit to Plitvice and promptly got lost. We drove on into the mountains, and for while it seemed like there was no getting out – just uncomfortable dirt trails, trees growing without human interference, no cell phone coverage, and multiple landmine signs with bold red skulls between leaves. It was endless. It was beautiful. And it was unnerving.

When we did finally get out, thirty-five minutes off schedule, we were greeted by a  blast of green. Bright, fresh, green-green. Plitvice screaming, “hello spring!”

We took our usual hike  – route H, starting at the upper lakes and heading towards the lower, stopping in between for a hot lunch (obviously) and coffee. 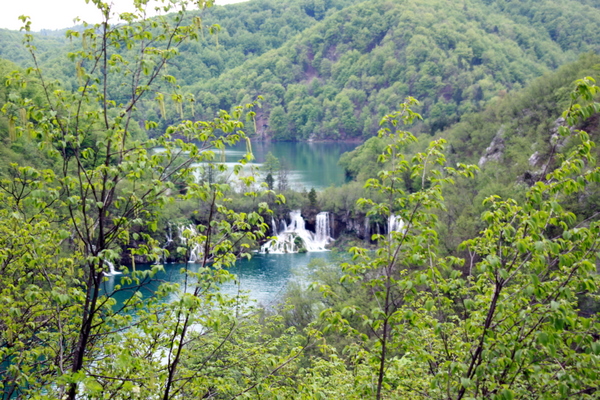 There was a little rain in the air, not as much as the morning forecast had threatened though. Most of the rain was caught by the canopy of green. The few drops that fell through got jumbled up in the waterfall spray. So we (I) didn’t have much to complain.

And the water was crazy. It usually is, but still, here, have a closer look  – it is that clear, that clean and that blue-green. And yeah, the fish tend to get really big. So big that at times they even scare the ducks away (probably did when this shot was taken). 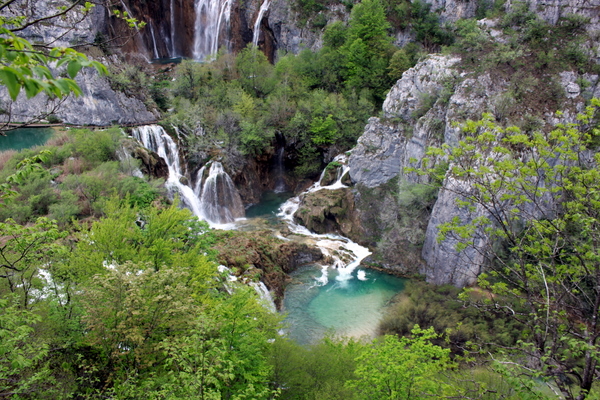 This picture is taken closer to the end. When Vivek was taking this shot, I was rambling on about how perfect it would be to have a house on that patch of ground (that olive patch was actually big enough to hold a house) between the water. I can’t get that imaginary house out of my head.

And that tiny dot on the ramp is my brother. No, really it is. We had almost finished out hike, when he ran back (okay, not ran but walked really, really quickly) down for this shot. If it didn’t involve so much activity, I’d have considered it too.

The photos on this blog are taken by my husband, Vivek. He uses a Canon 500D.

Dig through the Flying Suitcase

Put a Pin on it

Keep off my Text and Photos

Want to learn the craft of travel writing?

Sign up for Matador's new Travel Writing School and get the skills you need.

Ink Drops on my World Map